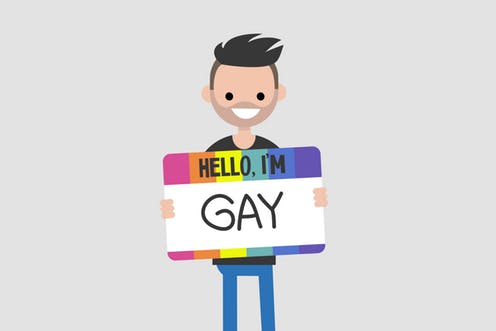 On a plane heading off to vacation last December, I decided to write down my goals for 2014. Somewhat to my surprise, the first thing I put on the list was coming out at work. I had thought about coming out at work for a few months, but it didn’t really take shape in my mind until I was sitting on the plane writing my goals. I had only separated from my wife and moved out on my own last June after coming out to her two years earlier. But the time between last June and this May seems like a lifetime, and I have grown and changed significantly.

There was a pivotal event that started my thinking about coming out at work. Last November, through my company, I was invited to a Gala black-tie fundraiser. I really wanted to go. I also really wanted to bring a male date. I lamented going for a very long time and got myself all wound up in knots over the issue. In the end, I didn’t feel comfortable bringing a male date to the event when I wasn’t out of work. It was a turning point that had me seriously think about what it meant to come out at work. So in December, when I wrote down my goals for 2014, coming out at work turned up on the top of the list.

Several things were driving why I wanted to come out at work.  First, and I think most importantly, I felt increasingly that I needed to be authentic at work and wanted to get rid of the separation I felt between my professional life and my personal life. Secondly, I no longer wanted to hide and thought I could make a visible contribution to the gay community by serving on the board of an LGBT nonprofit organization. Third, I wanted to feel comfortable going to work-sponsored events with a male date. I also had the sense that this would open up opportunities I could not even imagine.

Last week, after much back and forth in my mind and lots of rehearsing, I came out at work. I told my boss last Tuesday after telling two coworkers and then started telling my team and remaining coworkers. By last Friday, I had come out to 13 people and was completely mentally and physically exhausted. This week I’ve come out to another five people, and the weeks not over. I still have about 10 people left that I want to talk to over the next few weeks. With each conversation, the process becomes easier. I sat in a meeting today, thinking, “They all know, and it’s ok.”

I hoped that coming out would open up a whole new world, and I think it already has. My goals are starting to be met faster than I could have imagined. My company gives money to many nonprofit groups across the region. The person in charge of our community giving program is looking to see if she can help me find a board seat on an LGBT nonprofit organization in the District of Columbia, which I’m incredibly excited about.

In coming out, people are telling me who else is gay in the company. I learned that one of my coworkers is gay (who knew?) and very connected in the DC gay community. Through him, I got invited to an LGBT fundraising dinner in the District next week, where my company bought a table. And yes, I’m bringing a date!!

There are many things along the road that gave me the courage to come out of work. Most recently, I was inspired by the book, Making Gay History, by Eric Marcus. I was strengthened by reading about the courage so many gay and lesbian people demonstrated from the very beginnings of the gay movement in the 1950s through 2000 when the book ends. I was moved by stories about what it meant to live authentically– often before it was easy to do so.

You may be wondering about the reactions of my boss, coworkers, and staff. It’s been overwhelmingly positive! Everyone, to a person, has seen my coming out as a tremendously courageous thing to do in my mid 50’s and praised my desire to want to live authentically. Not everyone was 100% comfortable with the conversation, but every single person was supportive and happy for me.

Coming out at work brought me face-to-face with thoughts I had for many years about being gay that had kept me in hiding. Throughout the first week of coming out and the following weekend, old thoughts would pop up: “There’s something wrong with being gay. It’s a sickness. It’s an illness. Why do you want to disclose a sickness at work?” I did a lot of talking to myself to counter these thoughts, and each time I came out to somebody, these thoughts had less power and were weakened. This week I rarely had these thoughts.

What I absolutely love about the process I’ve been going through for the past few years is that every step in the journey, when I came out and told people who I really was, it made me stronger, prouder, and more integrated as a human being. It’s been unbelievably positive.