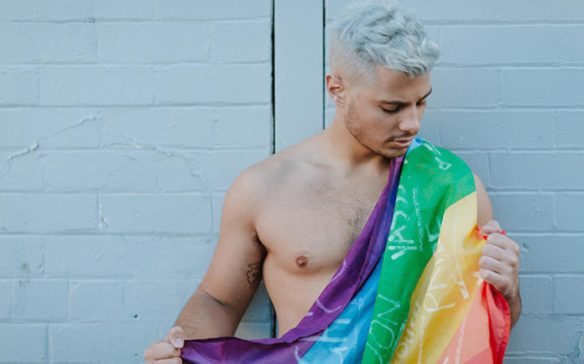 As I went from teenager to adult, from student to white collar worker, I began to actively compartmentalize the gay man within. I walled off a corner of myself that was gay and it became my own private landscape. I would be attracted to a man on the street but it never took physical form. The attraction was walled off in my mind and emotions. While I went on to get married, have a child, and continued to experience professional growth and some success, I was on constant guard. Was the gay showing?

There is a wonderful video on YouTube that someone forwarded me called, Panti’s Nobel Call at the Abbey Theatre.  Panti is a drag queen in Ireland.  She tells the story of a bunch of ‘lads’ in a car shouting out the window, “Fag!” as they drive by.  The part of her story that felt so familiar to me was how she thought about it. She asks, “What was it they saw in me?  What was it that gave me away?” What gives the gay away?

For so many years I was afraid that the wrong turn of my wrist, some less than masculine affectation, or the way I spoke would give the gay away. I was also afraid to get too close to anyone lest they find out the truth. This was particularly true of men. As I entered married life to a woman, the few male friends I had, begun to slip away, and I did not make new ones. I was afraid that a ‘real man’ would quickly see the gay within and be disgusted. I knew little about sports, especially football, and could not hold a conversation on the subject. I did not talk about women’s bodies or straight sex. So to make sure the gay did not show, for the twenty one years of my marriage I did not make any close male friends.

When I first met my wife I told her about my attraction to men, but having recently left a group, which I later understood was a cult, to change from homosexuality, I felt that I had “changed enough” to move on with my life. At the time I felt that my attraction to men was something that was more in the past. After a few months of intense discussion on the topic, it went underground. Here was a woman who knew, but was willing to keep my secret in trade for our life together. Once our relationship became serious, the topic of my interest in men was never discussed again, until I came out to her again a few years ago.

I remember when I was dating my wife, she shared a conversation she had with her father about my lack of interest in sports.  Her family was a big sports family, and particularly football. I never could quite figure out how the game of football was played. When my wife would try to explain football to me, my brain would wander away. Her father told her that some guys just were not that interested in sports, and that it was OK. Her brother though had me worried. He is one of those guys guys who loves sports in a loud testosterone fueled manner: big, bold, loud, and macho. Her brother and I never did become very close. In some ways I felt like I had dodged a bullet, but always wondered if my lack of interest in sports was suspect.

In baby steps about three and a half years ago, I began to come out to my family.  I came out to my son first, after he figured it out. I asked him why he had thought I might be gay.  In a typically teenagerish moment, he said, “Dad, really, it’s obvious: you like fashion, you don’t like sports and you like Glee.”  Had I been that obvious?  My beloved Glee gave me away?

My son was wonderful about my being gay. “You’ll always be my dad. ’ll always love you. It really is not a big deal that you’re gay.”  In that moment I realized how much I loved this new generation that was so open and easy about LGBTQ people.  The fear I had held for so long of losing my son if he found out was unfounded.

After coming out to my son I began to come out to my family, who had also known about my attraction to men, but all kept silent during the years of my marriage. I spoke to my parents first and then my four siblings. While my parents who love my wife, were hurt and saddened by the news, told me they loved me and fully supported me. My siblings all were happy for me. My youngest brother told me he had wondered if I would ever come out and he was proud that I had taken this step to be truly who I was. The wife of my other brother keeps trying to have her gay male friends fix me up with their friends. Who knew?

What I had not understood or even anticipated was how the gay compartment within me, walled off and kept hidden for so many years, had hurt my life. To the astute observer, the gay always was showing. But people see what they want to see. I wore a wedding ring, was married to a woman and had a child. Most people never questioned this. But it did not matter, I always was careful not to let the gay show. I hid the gay inside like I was hiding a terminal illness.

When I began to read more books about coming out; on gay men who married women; and gay autobiographies, the phrase ‘internalized homophobia’ kept reappearing.  For a long time I couldn’t see that I had internalized homophobia.  But as I’ve continued to look within myself and examine how I see the world, I began to see lots of examples of homophobia that I directed at myself.  Internalized homophobia is like Stockholm Syndrome which Wikipedia says is: “is a psychological phenomenon in which hostages express empathy and sympathy and have positive feelings toward their captors, sometimes to the point of defending and identifying with them.” I did that with my homosexuality. I took the worst views on homosexuality that were portrayed in the media and on television sitcoms and turned that hate and derision inward. I loathed effeminate men. Seeing two men holding hands on the street made me terribly uncomfortable. When I lived in New York City I made sure to stay far away from the Gay Pride and Halloween Parades, lest there be guilt by association. For years I stayed away from any gay themed book, movies, TV and areas of town where gays might congregate, lest I stir up my own feelings and give the gay away.

When Ellen Degeneres came out on Oprah in 1997, Oprah asked Ellen, “Why was it necessary for you to come out, for the character to come out?  Ellen’s answer: “Because it’s ok. It is ok.” When I watched this on YouTube about a year ago, I cried. This line touched my heart with the message that it was ok to be gay, to be who I was.  To be able to bring my whole self to work; to my family; to my friends has been quite powerful.  And I marveled that Ellen did this 17 years ago.

Is the gay showing today?  Probably, but I no longer care.  I’m out everywhere in my life at this point. That gay compartment where I hid all things gay within me has been cracked wide open. The internalized homophobia is gone to a great degree, but I won’t say fully gone, as I know there’s always more work to do in this area. And my life has opened up in powerful, positive ways I would not have imagined.