Last night I was at a business dinner and stood around talking with three other men. One of the men described a lifetime award he had recently received for his work over the years with the Boy Scouts of America, and noted that he had been a regional council president for a number of years. One of the other men asked if he was president when all the uproar happened. My ears perked up at this as I assumed the question was about gays in the Boy Scouts. Yes, he said, he was president of the regional Council at that time, and while he was personally in favor of change, he was surprised at how angry the topic made so many people who were not for change. The conversation continued for a few more minutes exploring the topic. Not once did anyone utter the word gay. It was if the whole conversation was so sensitive that the word could not be said out loud.

While I have mentioned to a few people in this group that I had separated from my wife, I have not come out to anyone in the group, and was not sure that I really needed to. This is a business group I meet with a few times a year and the conversations are rarely too personal. But the whole discussion did raise some interesting questions for me. When is it the right time to come out? Do I need to come out to everyone I meet? I do not feel the need to hide, but I also do not want to lead with being gay with every person I meet, and particularly in a business setting.

But I did feel strange listening to the Boy Scout conversation without disclosing my sexual orientation. Especially since I have opinions on the topic. The whole fight against letting gay boys be part of the Boy Scouts, though now relaxed, left me cold. I found the whole discussion in 2013 tainted with misinformation and prejudice. The compromise that Scouts made to allow gay boy scouts but not adult leaders over 18 years of age is part of maintaining that sick outlook on the topic held by the Boy Scouts. 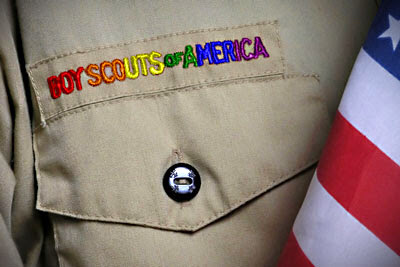 As of January 1, 2014, the Boy Scouts of America announced their new policy that, “No youth may be denied membership in the Boy Scouts of America on the basis of sexual orientation or preference alone.”, But, as I read it, they still retained their core statement which states, “While the BSA does not proactively inquire about sexual orientation of employees, volunteers, or members, we do not grant membership to individuals who are open or avowed homosexuals or who engage in behavior that would become a distraction to the mission of the BSA.” This statement now applies, as I understand, primarily to adult leaders over 18 years of age. But what about a boy who is an ‘open or avowed homosexual’? Would an effeminate boy constitute a distraction to the mission of the BSA?

In trying to learn more about this topic, I read a really good article that was published in the New York Times in May 2014 about how the Scouts had faired since their change in policy. The article summarized that no one was happy with the latest policy. And lurking in thinly veiled code words by those against gays in scouting is the inference that being gay is still a sickness and a moral failing. One man quoted in the article stated: “How can two boys both pledge to be ‘morally straight’ when they operate out of two different moral perspectives concerning human sexuality?” The not so veiled reference in this quote, making being gay a moral failure is all too clear. Even phrases like ‘avowed homosexuals’ implies a choice, where none exists.

In retrospect, I think I should have come out. At a minimum, it would have made for an interesting conversation. And I do have strong opinions on the topic which I did not give voice to. Each time I have come out it has made me stronger. But standing around at a business dinner with a group of straight men, for me, is one of the more gay intimidating situations. I always assume, often wrongly when I do come out, that straight guys will have an issue with me as a gay man. Not coming out, though, is like going back in the closet, at least a few inches. So next time, out I come.