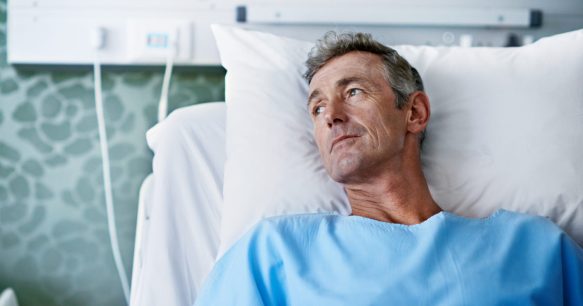 My father recently had robotic surgery to repair the mitral valve in his heart. Even though the surgery on the heart had been successful, the long surgery damaged his swallow reflex and he is unable to eat or drink without choking.

My sister said it was exhausting to visit my father in the hospital because it is so hard to see him in a reduced physical state. When we arrived at the hospital today my father was receiving food, for the first time, through a newly placed feeding tube. He had not eaten for the past two and a half days and for a man that was already quite thin, he looked emaciated. If you can imagine the wide-eyed blank stares of the bone-thin men that were freed from concentration camps after World War II, that is how my father looked this morning. Wide-eyed blank emotionless stare. It was unsettling to see him in this way.

While not quite at the end of his life, my father is definitely in a weakened place. While the surgery to repair his mitral valve was, according to the doctor, successful, it triggered atrial fibrillation and difficulty swallowing. For some reason, the muscle that closes when we eat or drink and prevents food from entering our lungs is not functioning properly for my dad. The doctors were afraid that he would breathe (aspirate) food into his lungs, which can lead to pneumonia, so they are did not allow him to eat or drink for two days. Yesterday they put a feeding tube in his left side into his stomach. And today, for the first time, they fed him through the feeding tube.

So it was exhausting to visit the hospital this morning to see my dad.