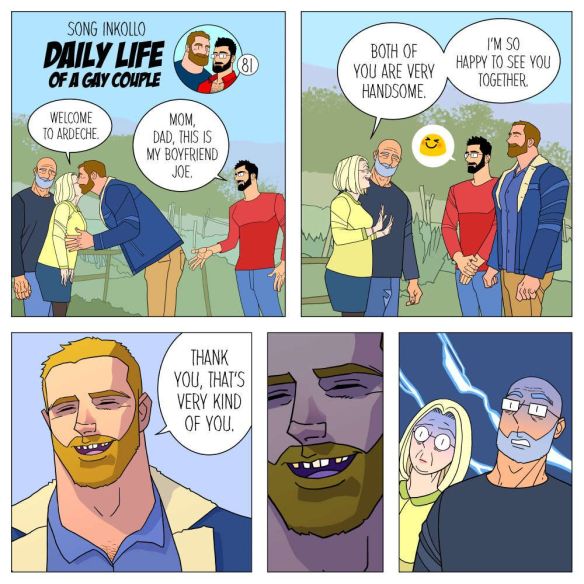 A few weeks ago I asked my boyfriend to join me on a visit to my parents. This would be the first time I have ever brought a man that I was dating home to meet my parents. As soon as I asked him to come with me to visit my parents, I immediately became filled with fear. I began to have thought about him seeing my parent’s large house, their money and meeting my extended family with their prying questions. For a few days, the thoughts almost immobilized me.

As I tried to explain to my boyfriend what I was feeling, still thinking it was a question of money and family, it all sounded a bit crazy. I was a mess of emotion and anxiety that would not settle down. One of the questions he asked me was how I felt bringing a man home for the first time. But I shrugged off the question, feeling at that moment that I had come out and was past these kinds of issues with my parents. We ended the conversation agreeing that it was not the right time for him to meet my family.

The next day, as I began to write in my diary, it became clear to me just how scared I was to bring a man home to meet my parents. Even though I am out to my parents, these were the same parents, who for so many years, I thought I could never come out to. As I thought about both my parents, it was the thought of my boyfriend meeting my father that most frightened me. I could see in my mind’s eye the father of my youth and his cocky masculine way of being. As I wrote in my diary, just like when I had come out at work a year and a half earlier, all the thoughts that had seemed so real were just the workings of old messages from my youth rooted in internalized homophobia. Once I saw this clearly my fear quickly dissipated.

As a young man, beginning about age 15 through my twenties, I was both frightened by my father and angry at him. In those years, particularly during high school, we fought constantly. He had a hard masculine edge and could get angry easily. I saw him as more successful than I felt I could ever be. He was driven, honest, and hard-working, but he was also inflexible and rigid in his thinking. His way was the right way, particularly when it came to politics and economics, and anything else was ridiculed.

I still remember a dinner with my aunt, the family’s liberal democrat, when I was in high school. She would always speak her mind about the world. I do not remember what she said, but I suspect it was a comment about the politics of the 1970s. I remember my father responding with an air of superiority and a belittling tone that made her look silly. I remember the contained anger on her face. No wonder my aunt always hated my father.

My father was not the kind of man to have a gay son. As a young man, I thought that my father would never accept me as gay. But that was many years ago. My father is now an old man. He will be 88 years old next month. After a year of illness and major heart surgery, he is weakened and trying to recover. He is no longer the tough, hard man of my youth. He has mostly lost that hard masculine edge he once had. He can still get angry, but I see it through a different lens then I once did, and do not take it personally.

When I came out to my father two years ago he was supportive and accepting. My mother also accepted me fully as well when I came out to her later that same day. And in truth, I had come out to my parents twenty-five years earlier, before I had met my wife to be and the subject going underground. So the news two years ago that their son was gay was not really a surprise to my parents. In fact, at the time, they were more shocked that I had separated from my wife than the fact I was coming out to them.

It is now Sunday morning. I came down to Philadelphia after work on Friday to see my parents. This morning my boyfriend will take the train from Washington, D.C. to Philadelphia and I will pick him up at 30th Street Station and head out to my parents for lunch. Bringing a boyfriend home is a rite of passage that I have not taken before. But seeing my fears clearly, rooted in an old way of seeing my parents, had most of my fear go away. There is still a little bit of nervousness left, but it is nervousness that is appropriate to the situation.

I am excited about today. I am excited for the man who I have been dating for the past nine and a half months to meet my first family and know my world that much better. It is a step in our relationship and an interesting one to take at 57 years old for the first time.

So let the day begin and go well!