I just finished reading the newly published book, Becoming Nicole: The Transformation of an American Family by Amy Ellis Nutt. It is a fascinating, well written story about what it means to be transgender in todays world. Nutt tells the story of the Maines family interspersed with chapters on the history and most current scientific understanding of what it means to be transgender. The book is a portrait of a family and their journey from the adoption of two male twins, and the belief by one of the twins, almost from his birth, that he was a girl inside.

While I have read a number of autobiographies about both male and female transgender individuals, I thought that the descriptions of the inner life of Wyatt Maines, later Nicole, her parents Kelly and Wayne and her brother, Jonas, as they went through this journey was fascinating. What made the most impression on me was the feeling and utter sureness that Wyatt had, from such a young age, that he was a girl inside. He liked girl things like his Barbie dolls and his My Little Pony lunch box. He wanted to wear girl clothing with feminine colors. Wyatt knew with certainty that he was a girl inside, before he had the words to describe what he felt and before his parents could fully understand. 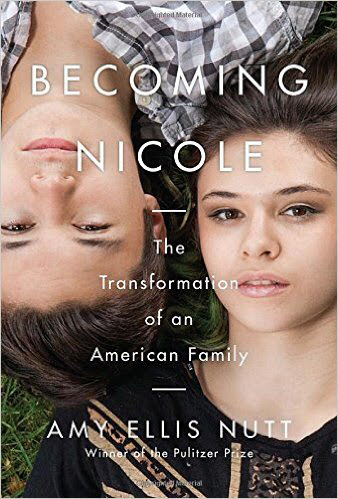 The book makes the case for the urgent need for families, schools and communities to support young people in their gender expression. Anything less makes for depression, shame, and feeling of low self worth. I was moved by how one family's fight for their daughters life changed the rules in the state of Maine. The Maines Family won their court case in the state of Maine’s Supreme Judicial Court, which ensured the right for all transgender school children in Maine to be treated fairly.

This book made the inner life of a transgendered individual more real to me than some of the other books I have read. It gave me a new understanding and comfort level on the topic. I also appreciated learning some of the most recent scientific understanding of gender identity.