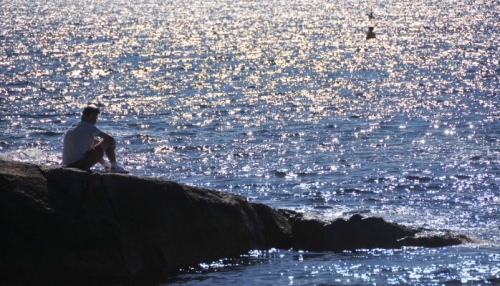 What alters our sense of self?  How do major life events make us feel less ourselves, and at times, have us lose sight of who we are?

A few years ago, about a year before my aunt passed away, I went to visit her at the assisted living facility my mother had placed her in after she could no longer care for herself. After a short time in her own ‘apartment’ at the facility my aunt was moved to a ‘memory unit’ on a different floor as her mental stability and thought processes declined.

My aunt who never married and barely dated, lived with her mother, my grandmother, throughout her entire adult life, until my grandmother passed away. My aunt lived another ten years alone before being moved to an assisted living facility.

For most of my aunt’s life, she was a bright, articulate, witty individualist. She was a hardcore outspoken democrat and would stand up to my republican father over many family meals. But as her health declined, and her connection to reality began to break down, assisted by the isolation and loneliness of life in an assisted living facility, she complained to me in a world-weary tone, that she no longer knew who she was, no longer felt like herself. Her comments stayed with me for a long time. This articulate, incredibly bright woman, was losing herself. I had never considered that a person could lose themselves in this way.

I recently read a New York Times a profile of Liz Smith, the long-reigning New York gossip columnist, who at 94, echoed a similar sentiment to my aunt:

“I am in search of Liz Smith,” she said softly, musing at the thought. “After a lifetime of fun and excitement and money and feeling important and being in the thick of it, I am just shocked every day that I’m not the same person. … I don’t feel like myself at all.”

After a year in which my own life was turned upside down by my wife’s cancer diagnosis and her eventual death eight months later, my aunt’s comments, echoed by the profile of Liz Smith, have played in my thoughts. I too no longer feel like myself, no longer know who I am with the certainty and clarity of a year ago. Where is that self that existed prior to my wife’s illness?

Four and a half years ago I moved out of my house and my marriage to be an out, gay man. I moved into an apartment and life that I loved; made new friends; dated up a storm. I met a wonderful man who has been my partner, boyfriend, and lover for the past two and a half years.

When I moved out of my marriage I knew who I was. I was a gay man in his mid-50’s and I was on a mission: build community; get involved in the LGBTQ world; join a board of an LGBTQ organization; come out at work, and find love. I have largely accomplished what I set out to achieve in coming out, including finding love. But today, living back in my house in the suburbs, I feel separate and disconnected from the self I knew a year ago.

When I moved out of my house five and a half years ago I gathered all the things that had the most meaning for me and took them to my apartment. Each object, picture, piece of furniture was carefully, maybe even obsessively considered. I had wanted to take as few things as I could from my house, so I only took what really mattered to me. I had some strange notion that I was moving out of the house without creating a ripple because I had taken so few things.

Moving into a new home with a small number of possessions was liberating. I felt a new energy and excitement about my life as I began dating, made new friends, entertained in my new home, and created a space that was all my own. I loved being in my apartment and the new life it represented.

A year ago this month, when my wife was diagnosed with a cancerous tumor in her abdomen, I immediately stepped in to support her and help navigate her care. Eight months later she was gone. The impact of her illness and ultimate passing on my life continues to this day.

For eight months I worked to balance my job, my partner, and to navigate my wife’s cancer treatment. Later, as her husband, it fell to me to make all the funeral arrangements, pick the casket, by a burial plot. As the executor of her estate, it falls to me to unwind her assets and see that her bequests are honored. It fell to me to go through her closet and give away her clothes.

Now, after thinking that I could continue to live in my apartment after her death and only visit our house to get it ready to sell, It became clear to me that I needed to live in the house to have the time to begin to get the house ready for sale. After the funeral, I moved back permanently into the house and am now in the process of shutting down the apartment that was the base camp for my new gay life.

That sense of who I was, an out gay man living my new life, is gone. I have returned to the house my wife and I purchased and renovated. The home is filled with furniture, art, rugs, and memorabilia that we purchased together. It is a lovely and comfortable house that my wife and I created.

But the house no longer is my home. It does not quite feel like my space anymore. It is like the feeling of going into a lovely hotel which you enjoy, feel comfortable in, but is not your home. I feel comfortable in my house but I do not feel that utter sense of being at ease that I once felt in my apartment.

I am pained by this feeling of no longer feeling like myself, of being on the treadmill of life, terribly busy, but no longer with a clear purpose or sense of who I am. I grow tired of my job of the last six years with its unrelenting work and responsibility. I look forward to selling my house next summer and moving. I love being with my partner on the weekends but when the starting bell rings Monday morning, I forget everything and feel buried by the treadmill of all my responsibilities, dragging myself to the end of the workweek.

I do not mean to complain. Life is good. I have my health; a comfortable life; an extended family that I love; and a wonderful partner I get to spend time with.

I just want to regain the self I once knew and I am trying to figure out how to do that. I am hoping that the move, in two weeks, of the contents of my apartment to my house will help me feel more at home in my house and more like myself.

1 thought on “No Longer Myself”