My father died last month at the age of 92 after a very long decline. He had no chronic condition but six-years ago had a heart valve repair surgery from which he never fully recovered. The rate of his decline was so slow that his caregivers and I were surprised that he did not pass away years ago. Over a period of six years, he slowly made his way towards death.

With the coronavirus raging across the world and most of us locked down in our homes, my brother asked me the other day, “What would dad think about what is happening in the world? After all of his years of thinking the world would end and civil society might break down, we may finally be there, but he’s not here to see it.” We had a good laugh, but then I began to think, what would dad really think?

I don’t know exactly how to describe my father. He was a successful businessman. He both made and lost a lot of money over his lifetime. He was in many ways a Don Quixote de la Mancha, always chasing windmills. He would invest and become passionate about things on the bleeding edge, and usually, after significant investment, would lose his investment. But he was always upbeat, optimistic, and positive, except when it came to the state of the world. He was sure that the next crisis that would upend civil society was just around the corner. He was always planning for the end of the world.

I was sixteen in 1973 and just learning how to drive. The gas shortage of the mid-1970s was also just beginning. I remember waiting in long lines for gas, only being allowed to get gas on even or odd number days. The price of gas rose rapidly over the next year and the lines for gas were long. My father was sure that the gas shortage signaled that an end to life as we knew it in the United States, potentially leading to civil unrest. 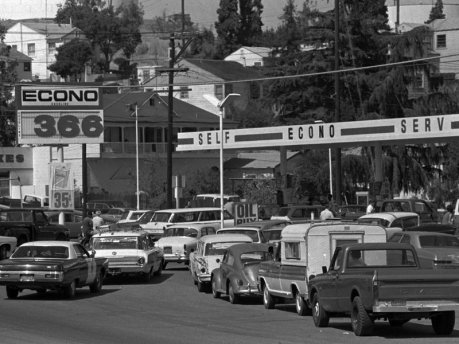 Waiting in line to get gas in the early 1970s

Dad was a man of action. We had long gone to Vermont every winter to ski but in 1973 my parents purchased a second home in northern Vermont. Dad stocked the house with barrels of dried grain and dehydrated food, fuel for a year, guns, and ammunition, all in preparation for the lawlessness that he believed would come. Dad made friends with the locals, telling me he wanted to make sure that if unrest and food shortages came he would be seen by the locals as a friend. The end of the world did not happen then but we did end up with a beautiful house for winter ski vacations. 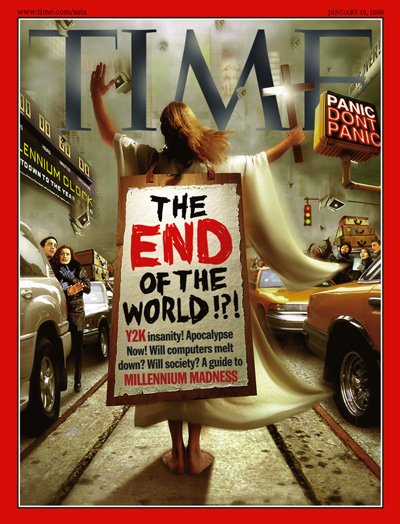 In late 1998 my dad began to talk about Y2K. Remember Y2K? It was touted as a potential end of the world crisis because older computer systems had been programmed, because of the high cost of storage in the 1960s, with only two digits for the year instead of four digits. No one knew what would happen to older systems when the year 99 turned over to 00. Would the computer program think it was 1900? Would these older systems work? Would there be a cascade effect bringing down connected systems like the electric grid or the air traffic control system? There were articles describing how planes could fall out of the sky, the banking system would lose our money, and the electric grid could collapse.

I was an IT executive at the time and part of my organization’s Y2K leadership task force. I knew that the world of 1999 was not very connected but no amount of convincing would persuade my father from his belief that Y2K would cause a major collapse of our entire infrastructure. He convinced a few friends of his to buy a ranch in Oklahoma. They equipped the ranch with bunkhouses, food, power, guns, and fuel for the chaos that was to come.

I remember Dad’s surprise and disappointment when none of his children would agree to join him for New Years’ at the ranch. So being the generous and Y2K obsessed father that he was, he had a palate, yes a full palate, of dried survival food shipped to each of his children. On New Year’s day, I called my father. “Oh well,” he said, “I guess I was wrong.” The ranch was finally sold five years later at a loss. 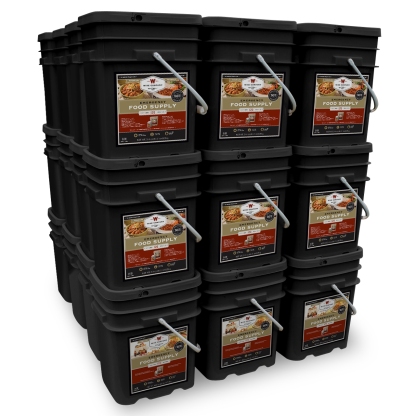 This is roughly a palate of dried food or 4,320 servings

Last year I moved my parents from their home of many years to an apartment. When we cleaned out the house we found stored survival food in two closets from two different eras, the mid-1990 and the 1970s, in boxes stacked to the ceiling, all of which had long gone bad. We found guns and ammunition, which were given to a local gun store. We found camping equipment, water purification supplies, gas burners, hand-crank radios, and some cash in a safe. Dad was prepared for the end that never came.

I have thought about my father’s penchant for predicting the end of the world repeatedly over the years. There were more examples, but I have only described the more dramatic ones. Why was obsession with the end of the world such a strong part of my father’s character makeup? On the one hand, he was an engineer by training and a successful businessman. On the other hand, he would “fall” for what I considered “hair brain schemes” for investment and things like Y2K, repeatedly and passionately.

What struck me about his Y2K obsession was how unshakable it was. Here I was, an IT professional who knew a great deal about IT systems and Y2K. My father’s IT background was non-existent having grown up using slide rules for his engineering degree. But no amount of arguing could convince him that he was wrong. He would send me articles about Y2K which I mostly saw as ignorant and fear-mongering, but he couldn’t see it. Buying the ranch was an expensive mistake and something seen as his folly even by some of the friends he had convinced to invest in it.

Now a global pandemic is here. We are holed up in our homes trying to avoid COVID-19. While I consider myself healthy, what if I am not as healthy as I think? If I were to get COVID-19 would it be mild or serious? There is no way to know. And with the shortages of tests, ventilators, and ICU hospital beds, I do not want to find out what the virus would do to me.

In this difficult time, I do understand how my dad could look at the future and see everything he had worked for begin to crumble before his eyes just as I’ve watched my the value of IRA in freefall.

In some ways I think dad would be in his element with COVID-19. Here was the possible end of the world that he predicted. And then, this may just be an awful phase we are passing through before the sun shines again.